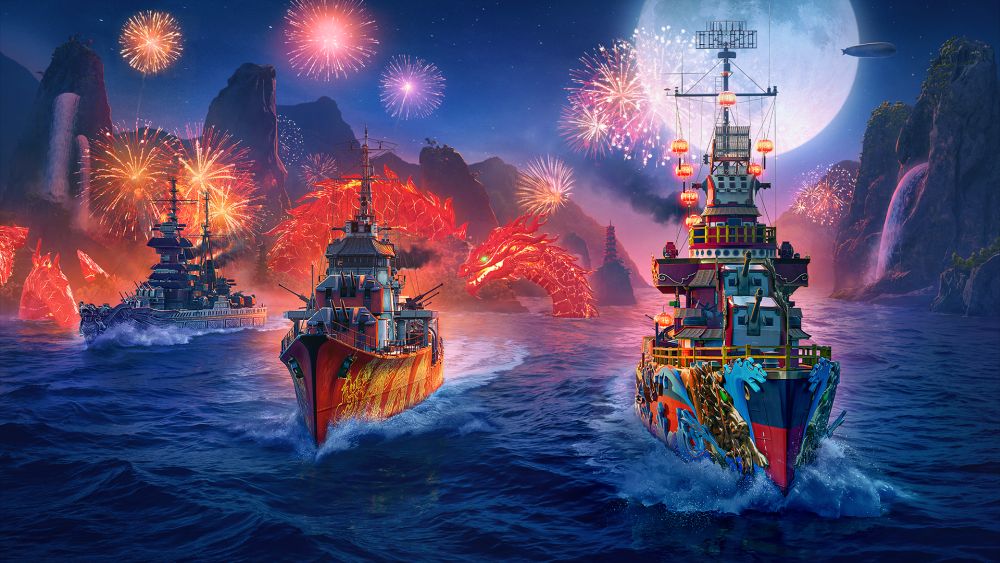 Wargaming, publisher and developer of the naval multiplayer free-to-play game World of Warships, is ringing in the new year with an abundance of new content in Update 12.0. To celebrate the Lunar New Year, the game introduces the new celebratory “The Age of Sa Zhenbing” collection. January’s update also sees U.S. battleships making their way into Early Access and a temporary battle type returning to the game. On top of this, Japanese cruisers are entering the Tech Tree, another season of Ranked Battles is kicking off, and balance changes are being rolled out across the board.

Various in-game celebrations for Lunar New Year are getting underway as the first order of the update. The first of these is the addition of “The Age of Sa Zhenbing” collection, detailing the work of the legendary Chinese admiral. Players will be able to gather elements of the collection from designated containers to obtain several prizes, ranging from a day of a Warships Premium account to the Commander himself.

Players can obtain the containers that hold elements of this collection in various ways—by completing combat missions, obtaining daily random bundles, and purchasing then from the Armory or Premium Shop. To further enhance the Year of the Rabbit celebrations, the Mid-Autumn Festival permanent camouflages for Dunkerque, Prinz Eugen, Kaga, and Warspite have all been updated.

Three new battleships of Tiers VIII–X are set to enter Early Access; these American hybrids, which have main battery artillery with a good reach and controllable squadrons of bombers, can be purchased as part of random and sequential bundles and are waiting for players at the end of the Warships Premium Battle Pass.

Three weeks after their introduction, a themed section of the Armory, as well as special groups of combat missions, will become accessible. Players will be rewarded with American Tokens for completing the missions, and these Tokens can be exchanged for camouflages, flags, bundles, Credits, XP and more! A special final reward awaits players at the end of this combat mission chain—Commander Statue of Liberty, equipped with their own unique voiceover.

An improved version of the “Dirigible Derby” temporary battle type from Update 0.11.1—“Airship Escort”—pits ships against each other in a 12-versus-12 format and is open to ships of all types spanning Tiers VIII–X. The format sees each team escorting an indestructible airship along a fixed route, with the objective being to either beat the opposing team to the end of the route or destroy all of their ships in the process. Battles are fought on a large range of maps, including North, Trident, Shards, Estuary, and Islands of Ice, and they will test players’ prowess while providing them opportunities to earn a number of special achievements and Community Tokens within the game.

Closing out the first update of 2023, Japanese cruisers are entering the Tech Tree, offering good concealment and high-damage torpedoes. Another season of Ranked Battles is also set to make waves in the game, with a six-versus-six format for battleships, destroyers, cruisers and aircraft carriers to get stuck into.