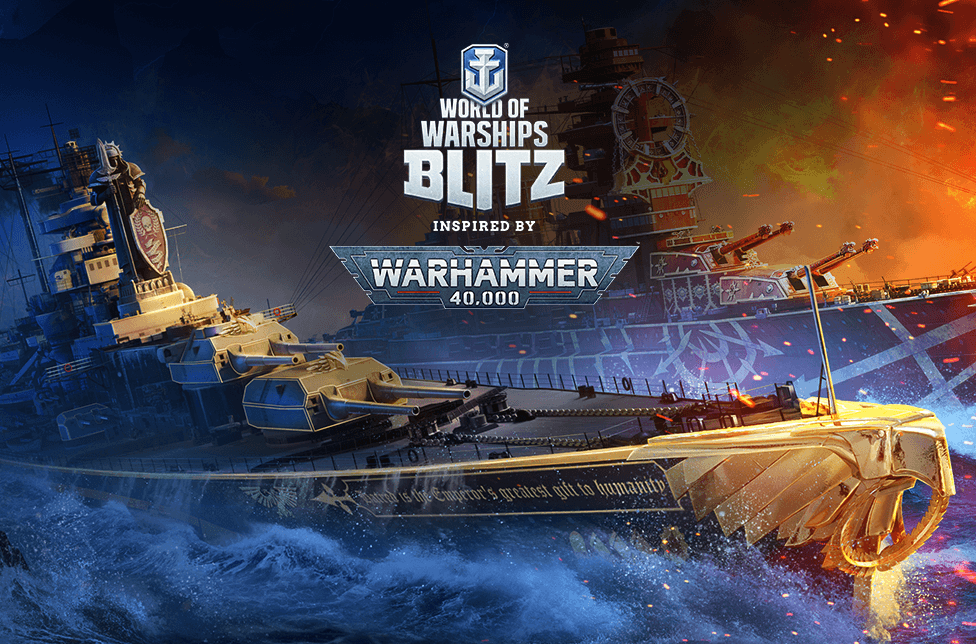 World of Warships Blitz, an accomplished mobile naval action MMO with 30m+ downloads worldwide and a Pocket Gamer People’s Choice Award under its belt, is about to treat its players to exclusive content inspired by the rich and grimdark Warhammer 40,000 universe. Starting December 2, steer mighty Naval Battleships in the name of the Emperor of Mankind or for the Blood God!

World of Warships Blitz players will be able to take charge of two brand-new Tier VIII Battleships: the Ragnarok and the Ignis Purgatio. They each come with a unique camouflage and a custom voiceover Commander who provides an additional upgrade to their ship when equipped.

The unique content can be obtained in the game’s Premium Shop, via the Blitz Pass and Crates.

What side are you on? Procure your mighty Naval Battleship, shell your adversaries with powerful salvos, and turn the tide of battles to rule the waves!

Wargaming, publisher and developer of the naval multiplayer free-to-play game World of Warships: Legends, is headed east this update with a slew of Pan-Asian destroyers for players to captain on the high seas. Alongside this brand-new content, the limited time Origin of Wisdom campaign continues, Ranked Season 20 begins, and even more new ships are introduced alongside the return of some old favourites.

Take to the seas in powerful all-new Pan-Asian destroyers starting with the cruiser-like Tier I Shi An all the way up to the fearsome Tier VII Hsienyang, along with two new Commanders, late Qing Dynasty Admiral Sa Zhenbing and Captain Deng Shichang. Both Commanders come with different traits and skills to suit the player’s preferences.

The new line also comes with deep water torpedoes that are only able to hit ships with deeper draft – in other words, everything but destroyers. Research this branch to inflict heavy damage on enemies to flood their hulls, and prepare for the imminent Dragon Fleet Bureau project

The Origin of Wisdom campaign continues

On top of this, the six-week Origin of Wisdom campaign is live until December 20th, with a mountain of missions left to complete and rewards to obtain, including a swathe of boosters, camouflages, XP, credits, crates and patches. Missions from previous weeks are still available for players to accomplish if they’ve yet to start, with two Premium ships Tier IV French destroyer Siroco (unlocked at milestone 40) – armed with impressive 130mm guns, and Tier VII German cruiser Mainz (unlocked at Milestone 120) – with armour as thick as a heavy cruiser – still up for grabs.

Double the Bureaus, double the fun

Also on its way with Update 3.9 is an important decision for players to make – the choice between two Bureaus. The Legendary Tier USN Battleship Montana comes packed with 4×3 guns and solid torpedo protection, perfect to compete in the highest tier battles. On the flip side of the coin, however, is a flurry of Commander Progression items, scattered through the Dragon Fleet project, that can be boosted by the Pan-Asian navy branch.

Sailing into this update for the first time is the Tier VI Premium French battleship Strasbourg of the Dunkerque-class, historically a great asset against German raiders. With a speedy main battery reload and traverse as well as all-bow turret configuration, this beauty can add even more layers to playstyle.

And marking their grand return to World of Warships: Legends are a variety of ships, Commanders and themed in-game items from this year’s epic Godzilla vs Kong collaboration, as well as the Arpeggio of the Blue Steel -Ars Nova- range.