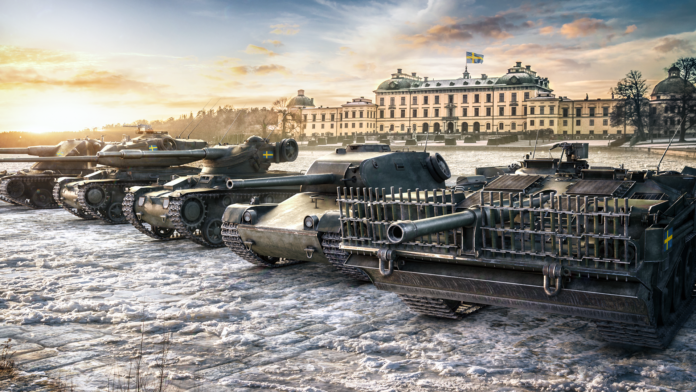 Nation number nine is nearly ready for deployment on the battlefields of World of Tanks Console, striking the frontlines of Xbox and PlayStation 4. The Swedish line will start to roll out on November 2 on PlayStation 4 PlayStation 4 Pro, Xbox 360 and and Xbox One, while Xbox One X players will be able to play with all nine nations right from the start at the upcoming console launch.

Tankers can break out the meatballs, turn ABBA up to eleven, and sample some of the finest tanks the nation has to offer, as well as the unique Primo Victoria vehicle from the band Sabaton.
20 new vehicles are there for players to choose from, including light, medium, and heavy tanks through to tank destroyers. Sitting pretty at the top of the Tech Tree is the mighty Tier X heavy tank Kranvagn. For ambitious players it is more than a welcome alternative to fan-favorite Tier X tanks, like the AMX 50B and T57.

Tank destroyers may begin with what players are used to, and all vehicles boast low profiles to secure great positions, but a pure game changer is introduced for the very first time at Tier VIII. The UDES 03 and onto the Strv 103B unveil a complete new playstyle: Siege and Travel. The former is for when you’re safe and secure, ready to ramp up the damage by reducing your speed and upping your damage output. The latter is for when things get a little too hot to handle and you need to make a quick getaway.

“Console players were demanding the implementation of the Swedish nation after its overwhelming feedback when launched a few months ago on PC, so everyone on the development team was really excited to bring them to console as quickly as possible,” said TJ Wagner, Executive Producer, World of Tanks Console. “We pushed all our resources to the max to throw in the unique Primo Victoria from Sabaton, too, so players can experience tons of great content to change up combat on their preferred console.”

First revealed at this year’s gamescom, Sabaton are a Swedish power-metal band who, when not making music about epic battles, like to jump into a few themselves in World of Tanks. The guys created a special World of Tanks-themed video for their song Primo Victoria. As well as starring in the video, the band appear in-game in the Primo Victoria tank as crew members.

With all that hot news, players may need to cool off. Luckily, the game has tankers covered with Murovanka in a new blizzard setting. Battle lines and tanks will be blurrier than usual, offering an extra challenge to even the most veteran players.